EXA Infrastructure, the largest dedicated digital infrastructure platform connecting Europe and North America, today announced its initial commitment to investing in a series of major enhancements to its network across Europe, with many already underway. EXA is executing a targeted growth strategy to invest capital in new infrastructure alongside unlocking optimal use of existing assets.

The network build and optimisation programme, which will primarily focus on routes in the Mediterranean region in southern and eastern Europe, is part of the company’s vision of becoming the undisputed leader in the European digital infrastructure market, with the broadest geographical coverage across the continent and transatlantic routes. Through the creation of several new terrestrial and sub-sea routes, and the lighting of dark fibre to increase capacity on many existing links, in its first half-year in business EXA has invested €190 million in adding more than 7,000 kilometres of network, with additional capital expenditure of up to €150 million due to be committed before EXA’s first anniversary in September. The investments are in parallel with the annual cycle of regular enhancements to the capacity and intelligence of the network, with greater automation and resiliency.

EXA has also today announced a Memorandum of Understanding for a joint venture with the Trans Adriatic Pipeline AG (TAP), part of the Southern Gas Corridor transporting natural gas from Azerbaijan to Europe, to build a new fibre route connecting France with Turkey in a substantial 878-kilometre expansion of its network. This will create the only direct connection between south-east and western Europe to provide high-levels of redundancy over existing multi-stage alternative routes.

As hyperscale network users, large enterprises, telecoms carriers and governments look to use ever-increasing amounts of bandwidth, the investment will enable EXA to meet growing capacity demand where those large customers do and will need it, and offer them more diverse routing options.

Beyond the joint venture with TAP, the investment projects that EXA will focus on as part of the targeted programme are:

comprising 800 kilometres of new network and 1,600 kilometres of upgraded routes to support new sub-sea cables scheduled to be built from Italy during the next three years 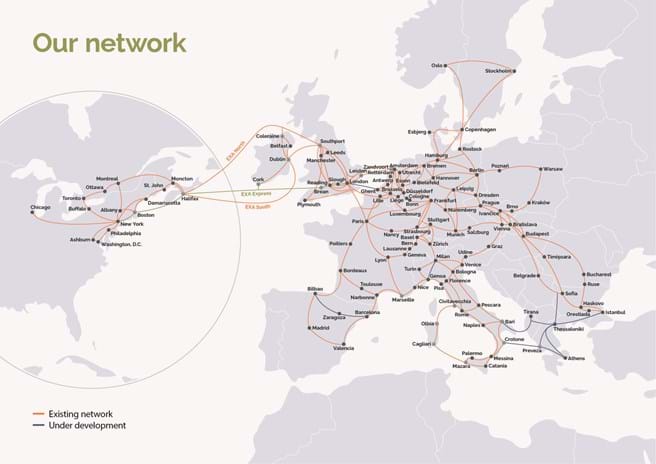 “Our intention is simple - we want to carry the most important traffic for the most important customers by offering the broadest geographic coverage,” said Martijn Blanken, CEO, EXA Infrastructure. “The European telecoms sector has been largely starved of major capital investment for more than a decade, but the insatiable demand for bandwidth from large companies and our close partnership with them means we are able to commit to bringing more network capacity to the parts of Europe where data traffic demand is surging.

“Through spending on new assets and optimising the use of what we already have, we will offer the best and broadest network available, with the best technology and a team that is easy to do business with,” he added.

EXA Infrastructure and the Trans Adriatic Pipeline AG (TAP) unveiled an memorandum of understanding for a joint venture to build a new fibre route connecting France with Turkey in a major expansion of EXA Infrastructure’s European network.